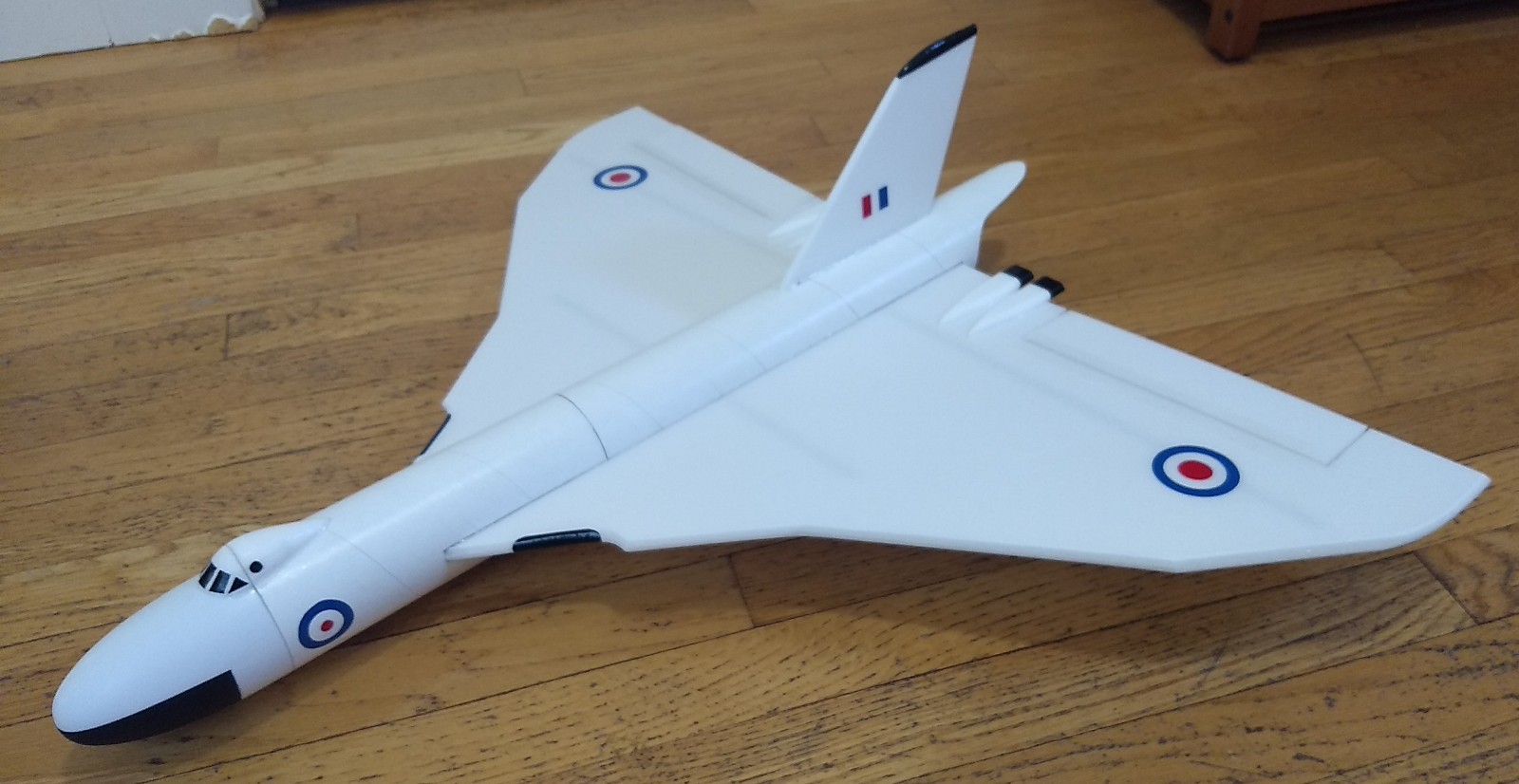 ​The Vulcan Mini RC Rocket glider kit is modeled after the classic cold war British nuclear “V” Bomber. It is designed for 18mm D2.3 longburn motors only!!. It features a pre-cut body tube with tail, wing slots, and tail “stinger” pre cut.  It has a light wing loading giving it a very nice glide and easy/stable boost.  It comes with white tubing for the body, 6mm depron wing, tail surface, cockpit and 3mm dummy motor detail. Construction is very simple and takes about an hour and a half.  Elevons are pre-hinged, the rail button holes are pre-cut. The wing spar slots are pre-cut.  You will need two 8-10 gram type servos, a receiver, a small 15 gram or lighter 500mah single cell lipo battery.  and a transmitter with delta or elevon mixing with flight modes or flap/elevon trim function.  Length 22″, wingspan 23.5″, weight rtf  5 oz.  High quality cut vinyl decals from Stickershock are available, make sure to select the small set  HERE

CG location for rocket flight: 6 5/8″ forward of  the trailing edge of the wing at the body tube.

How to remove the spektrum AR-410 casing to save 3-4 grams of weight:

Identify all pieces, the kit should contain:1  wing  taped together

Spare depronNotes before starting:Reference to CA+ means foam safe CA+, normal CA+ will melt the foam!  Normally you need to use accelerator to get the CA to set on the foam since there is nothing for it to soak into and activate.Epoxy is not needed in this model.  Weight is critical and the model is designed for the thrust and flight loads.  Weight in the rear end is bad and will require additional weight in the front of the model.

I’ve found that rather than sanding the wing and tail leading and trailing edges to simply use a thin straight edge and exacto knife to cut a 1/8″ bevel cut on the top and bottom, it’s quicker and less messy and less prone to tear an edge of the foam.  On the tail cut a 1/16″ bevel.  For the rounded portions of the wingtip and stab, the cockpit assembly and motor details you can use 320 or 400 grit, a sanding block and a very light touch.  Do this before assembly.

The basic construction is now complete.Radio InstallationNote:  Your radio needs to be configured for Delta mixing, this means that the servo arms will move the same direction during elevator stick movement and opposite for aileron stick movement.  Connect your servos to the receiver one in the aileron connection and one on the elevator connection and apply power.   Use a servo arm at least 9/16” long and with holes small enough that there won’t be slop with the pushrod wire when installed.  I use the hole furthest out on the servo arm, to maximize movement. On some servos there are a long two-ended servo arm, you can trim off one end if needed to get sufficient length.   Zero out any trim settings on the transmitter. The model once the motor has burned out is nose heavy and flying wings lose pitch authority when nose heavy so you want as much up elevator travel for trim/flare as possible.​

Flying:  See the General Instruction/Information link at the top for flying instructions.  Be ready on the first few flights to keep the model straight till you have the trims set perfectly for boost and glide. 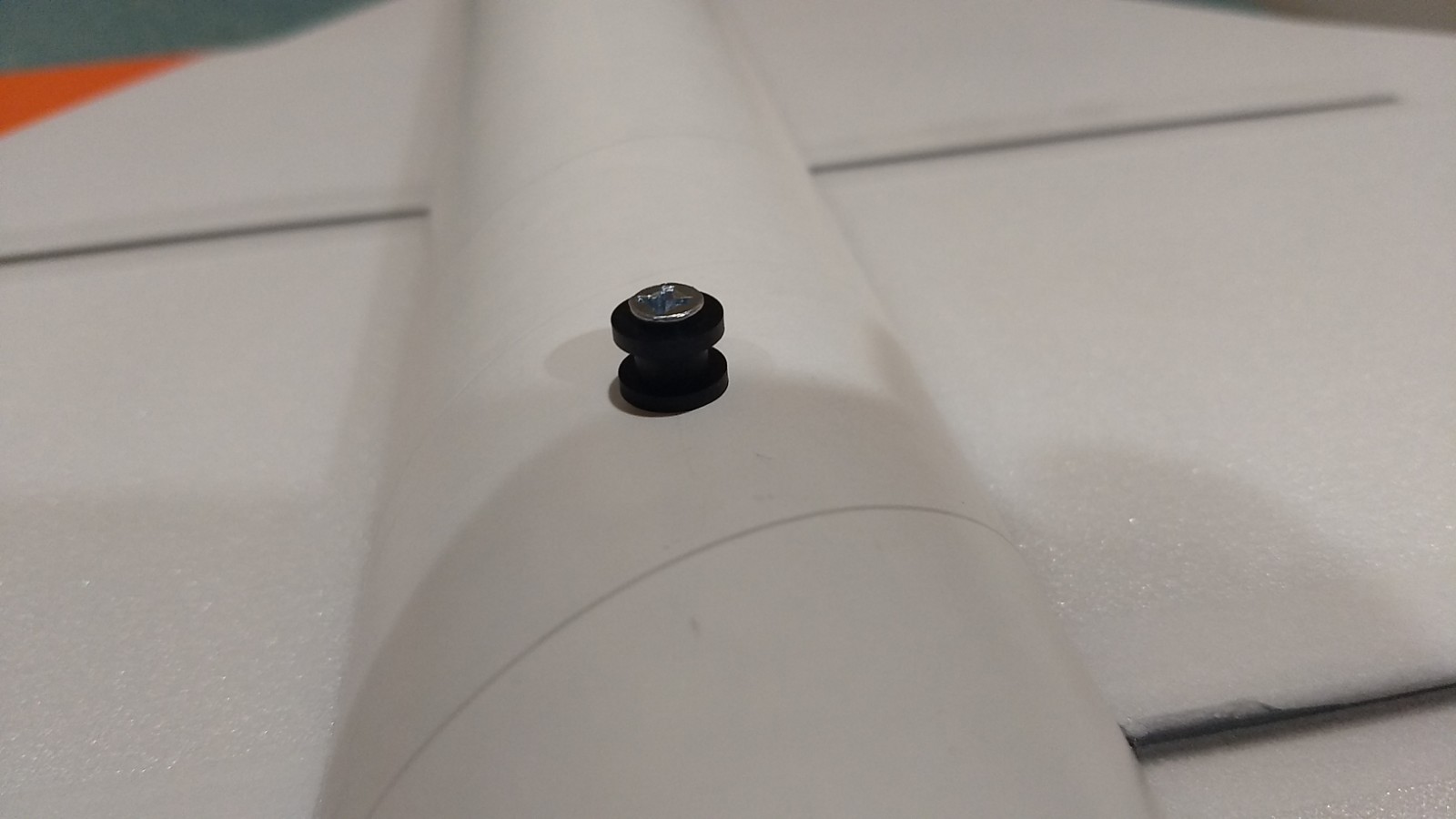 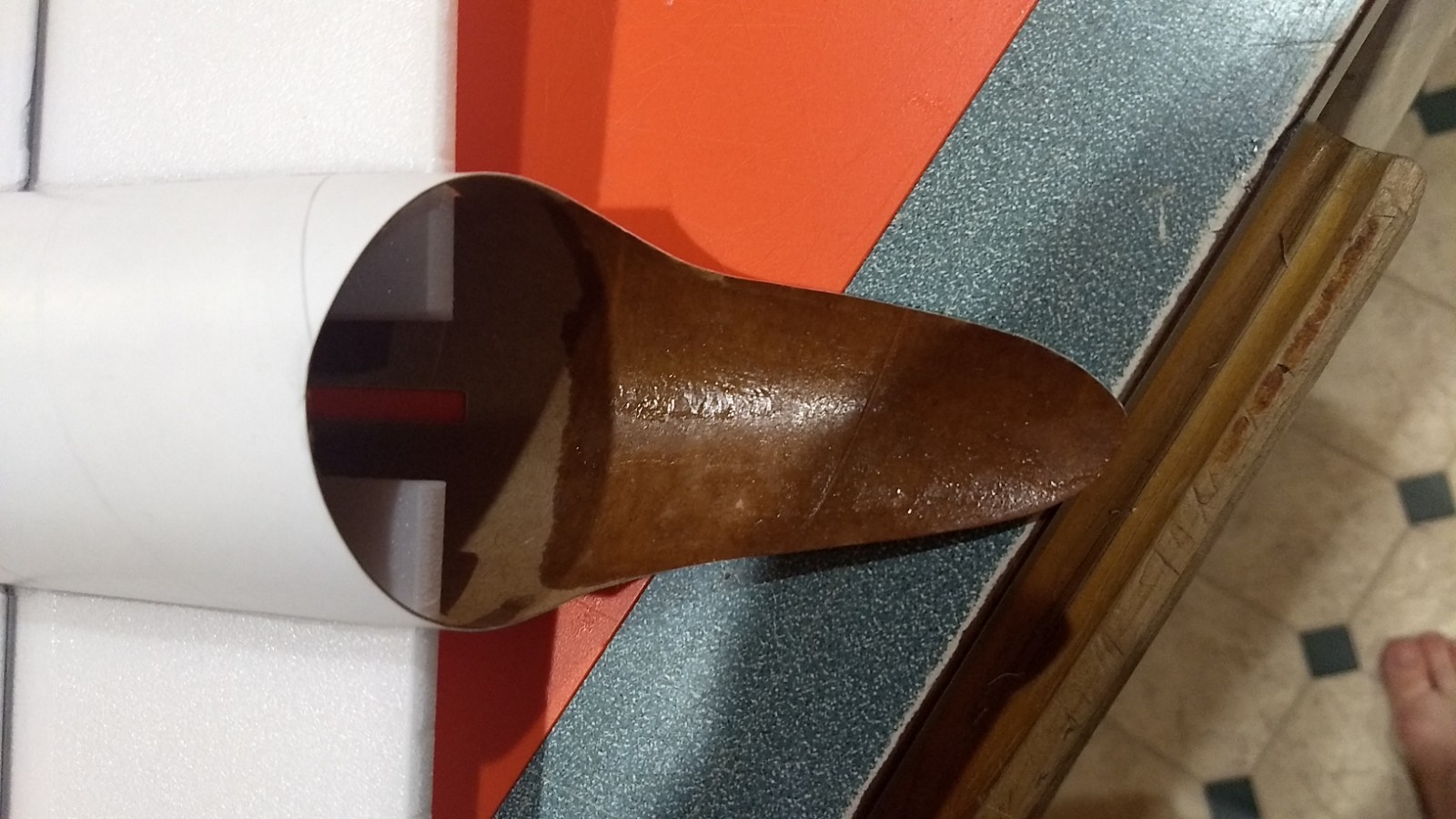 Soak the rear of the body tube extension with CA glue to harden it from handling damage. 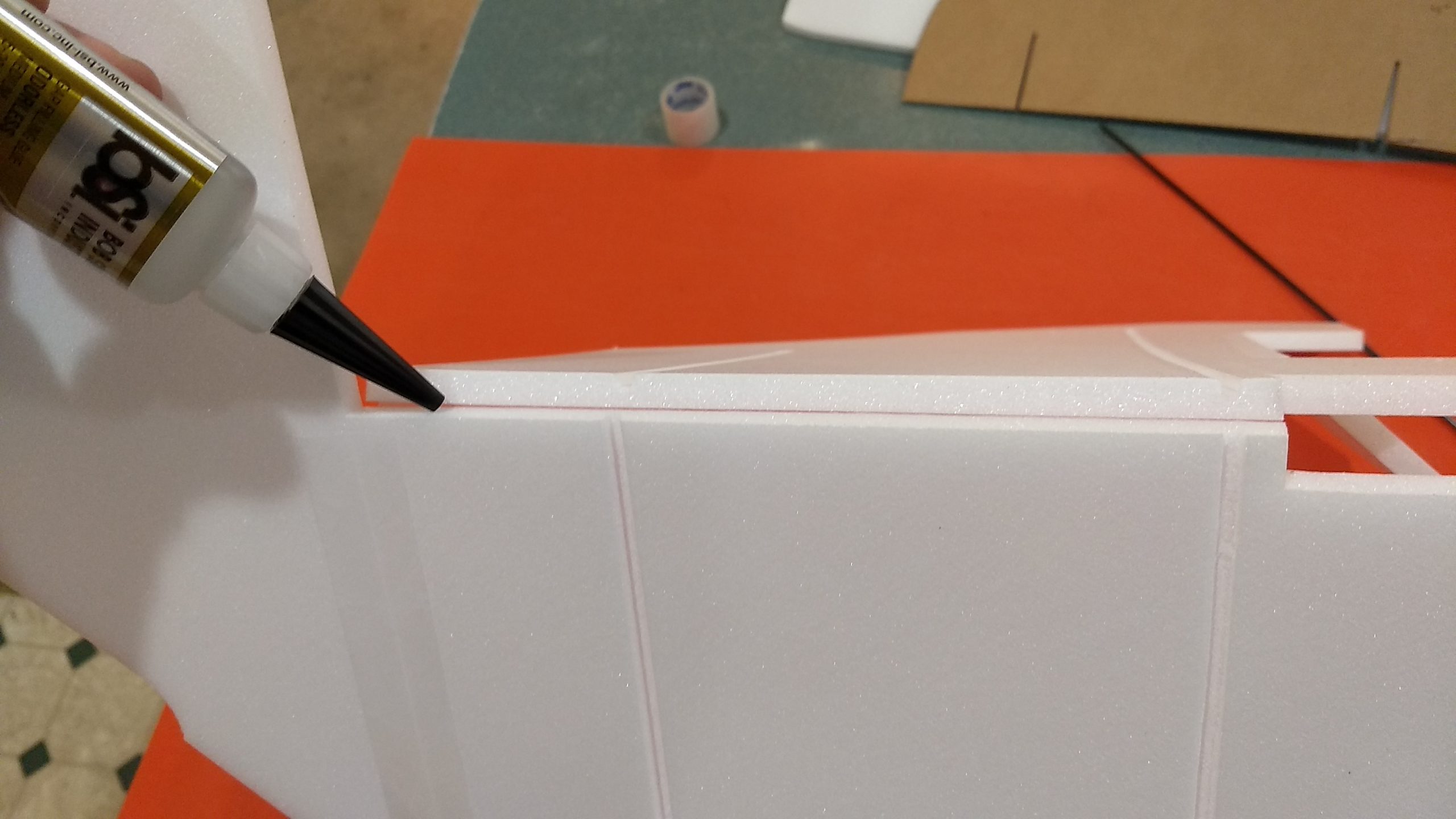 Glue the taped wing joint and lay flat to dry 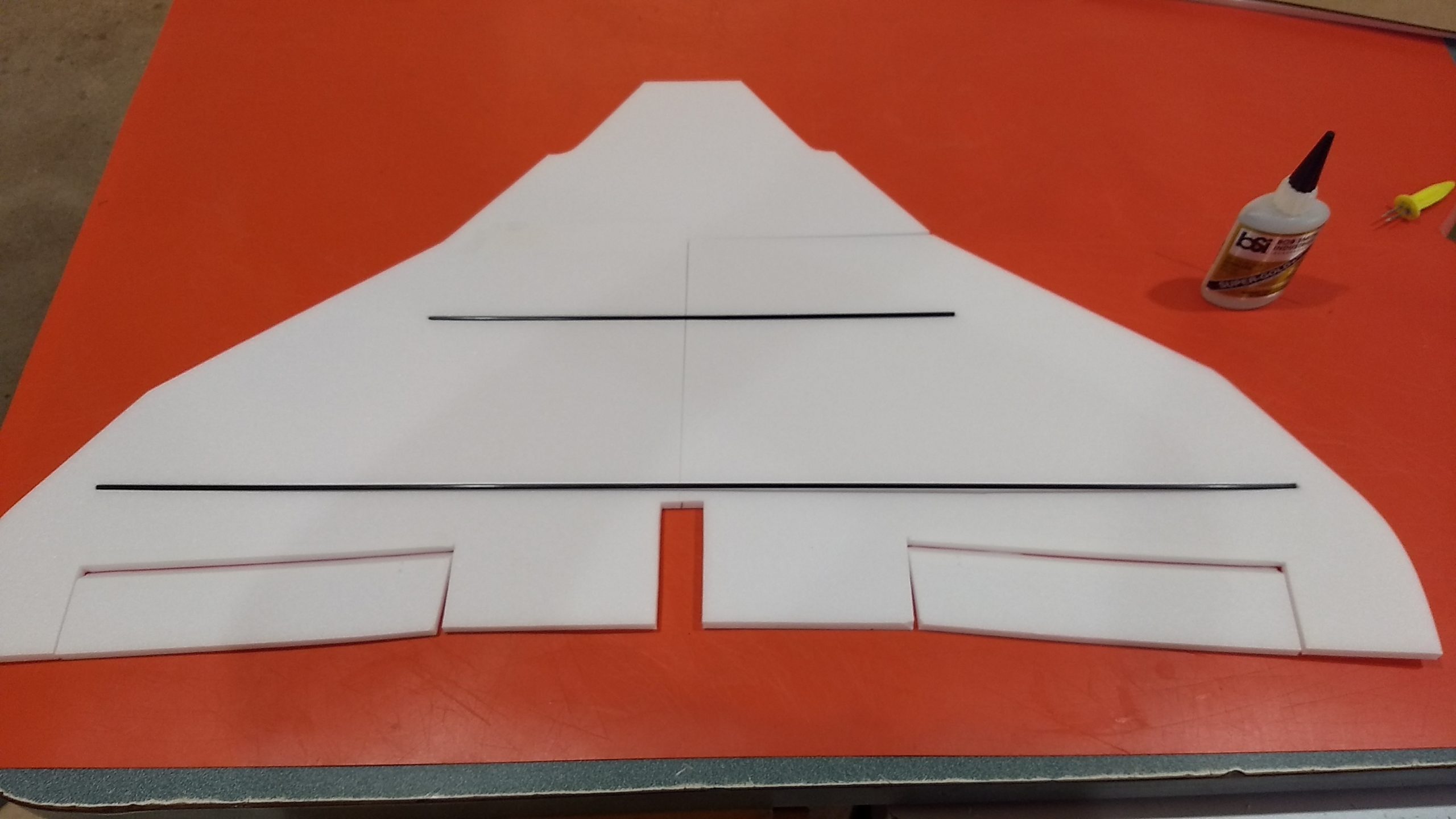 Glue in the wing spar then tape over the spar and center joint on the bottom. 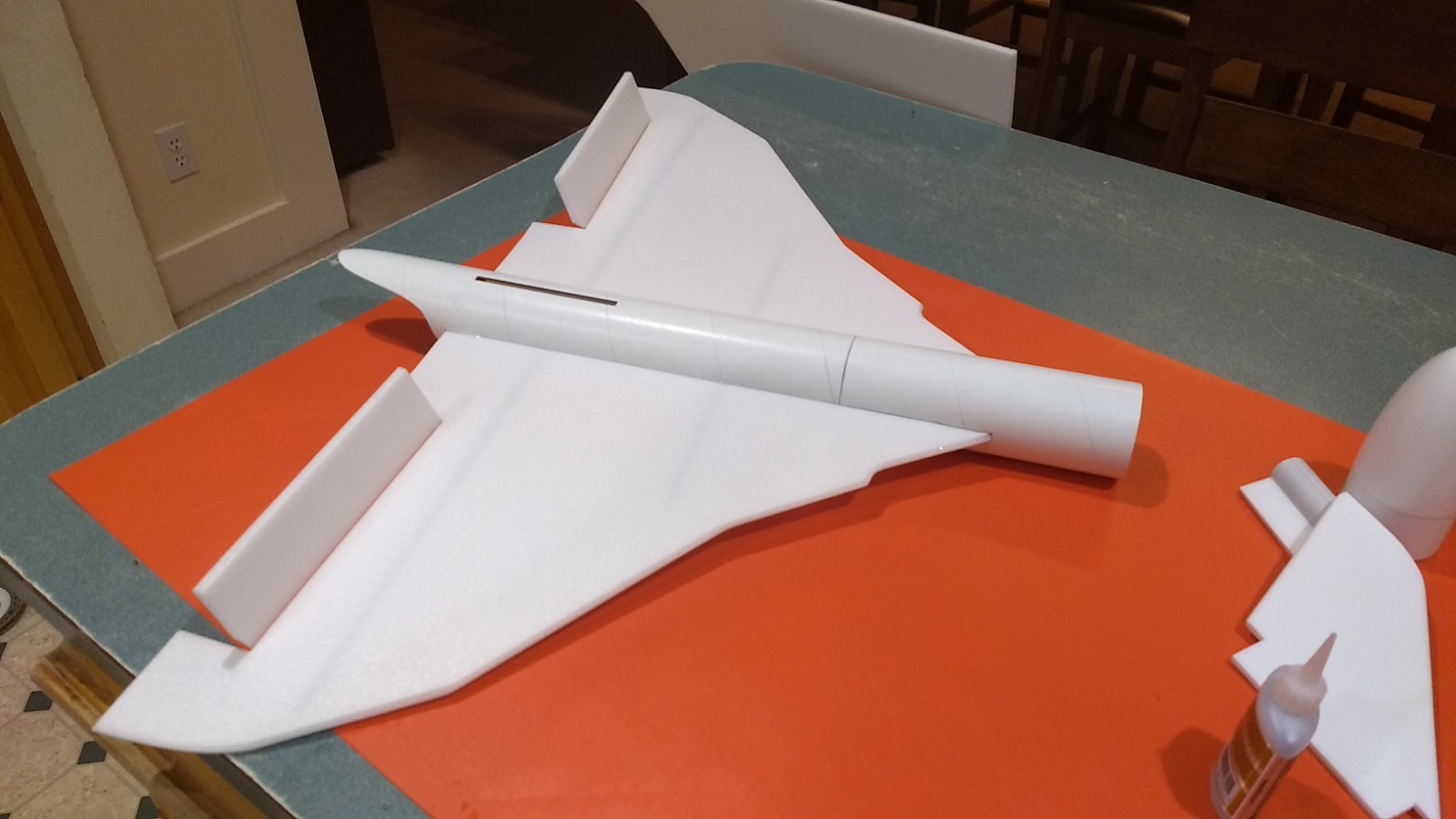 Test fit then glue the wing in the slot. 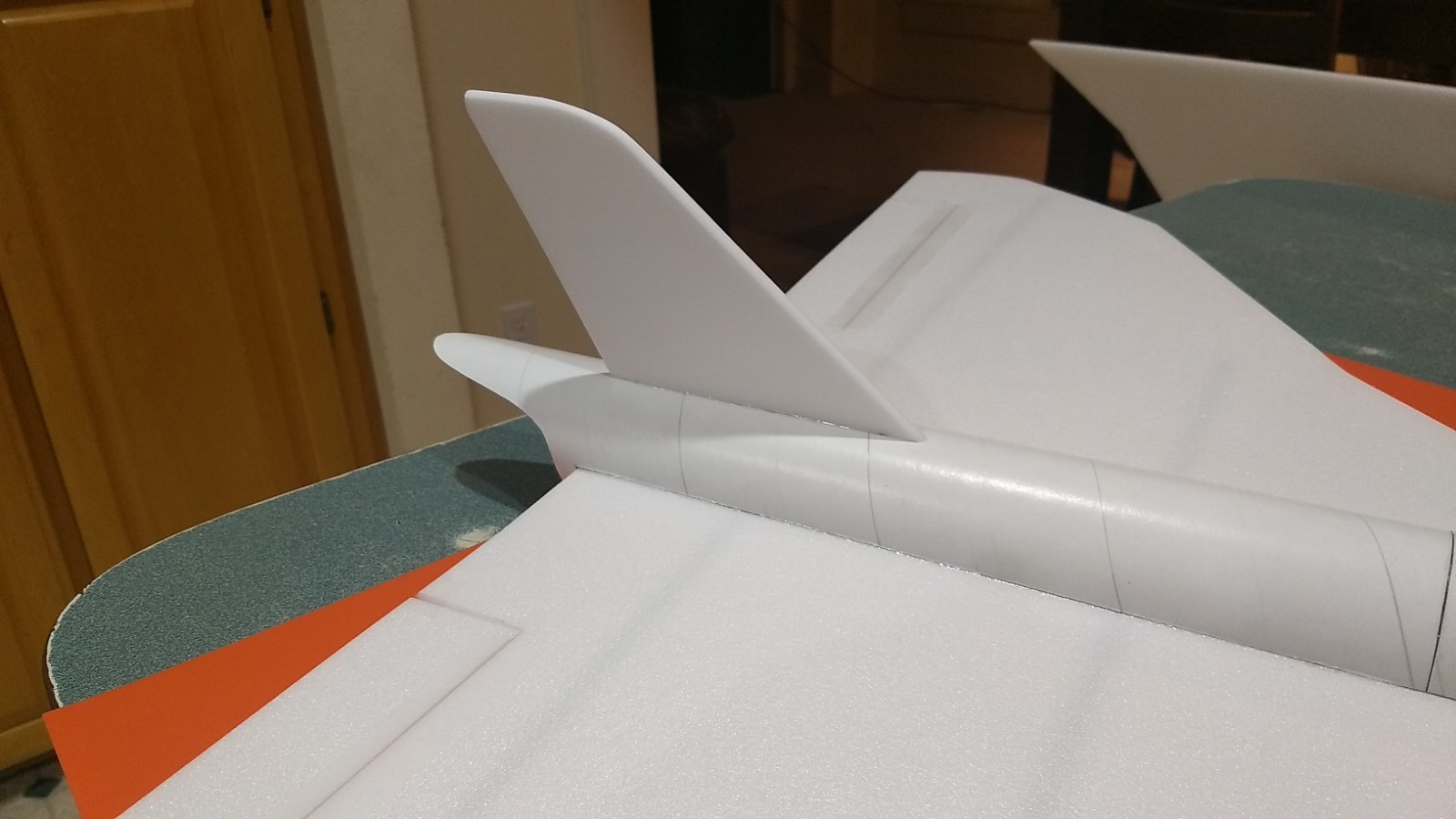 Glue the stab in place. 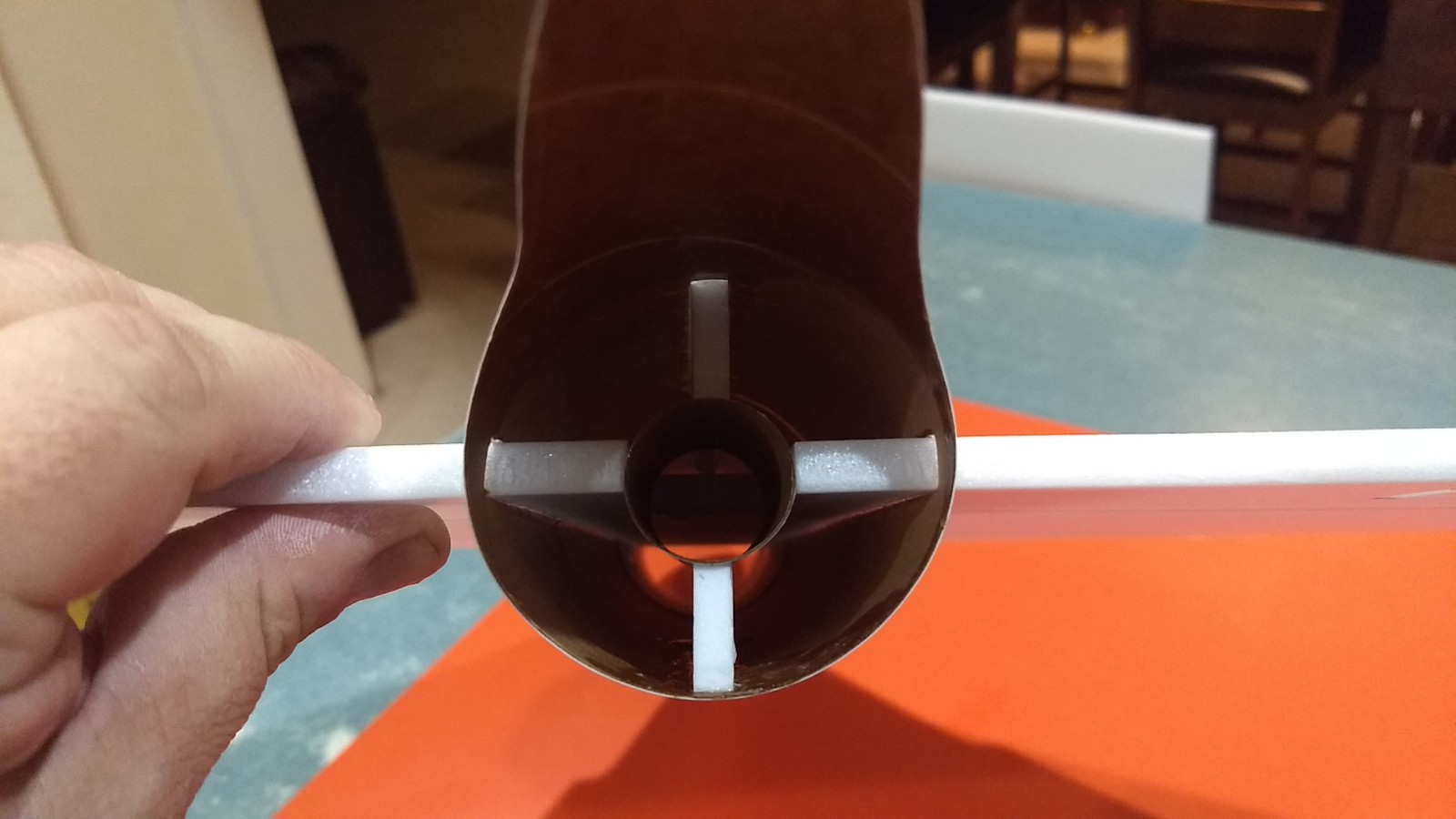 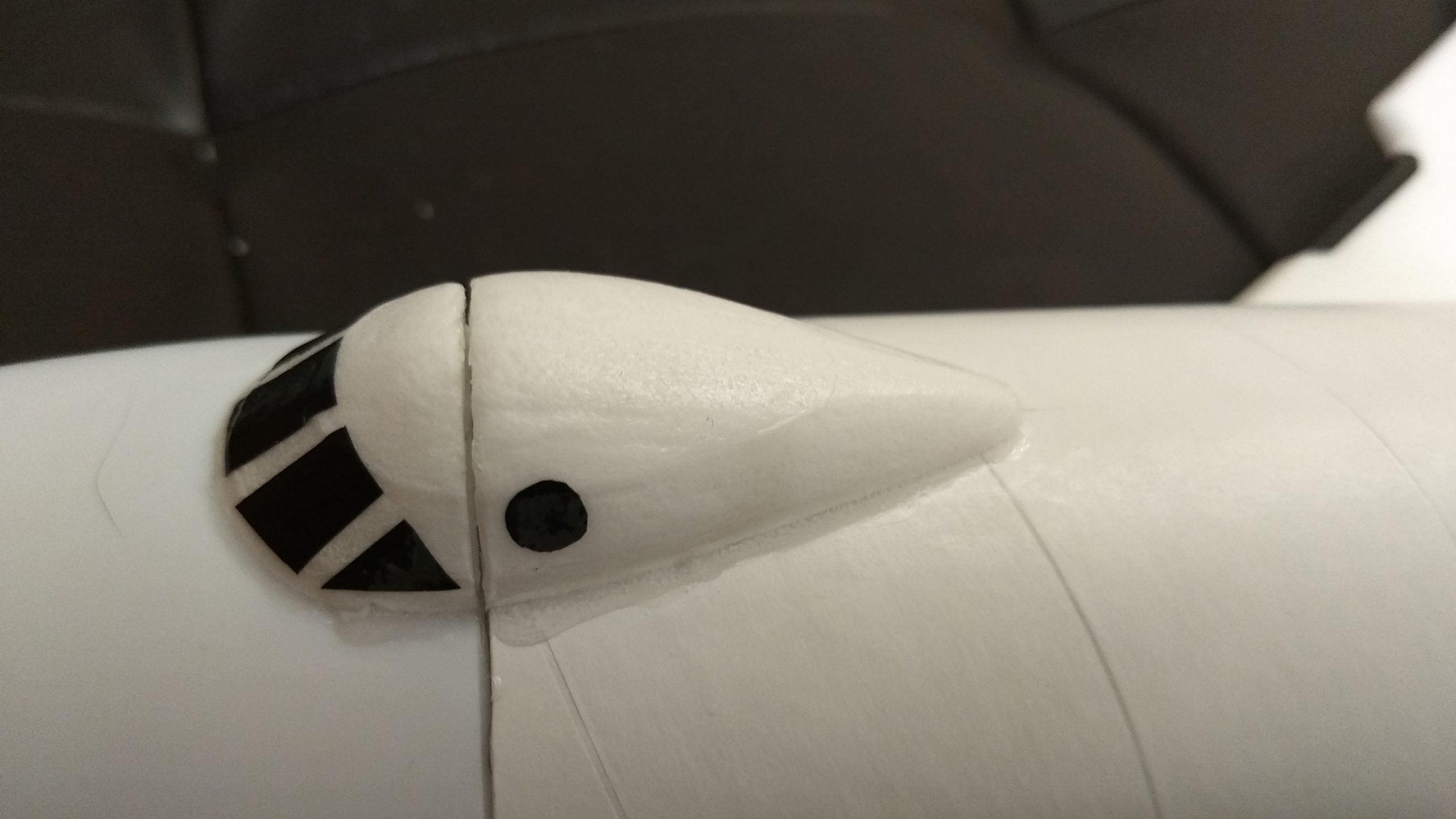 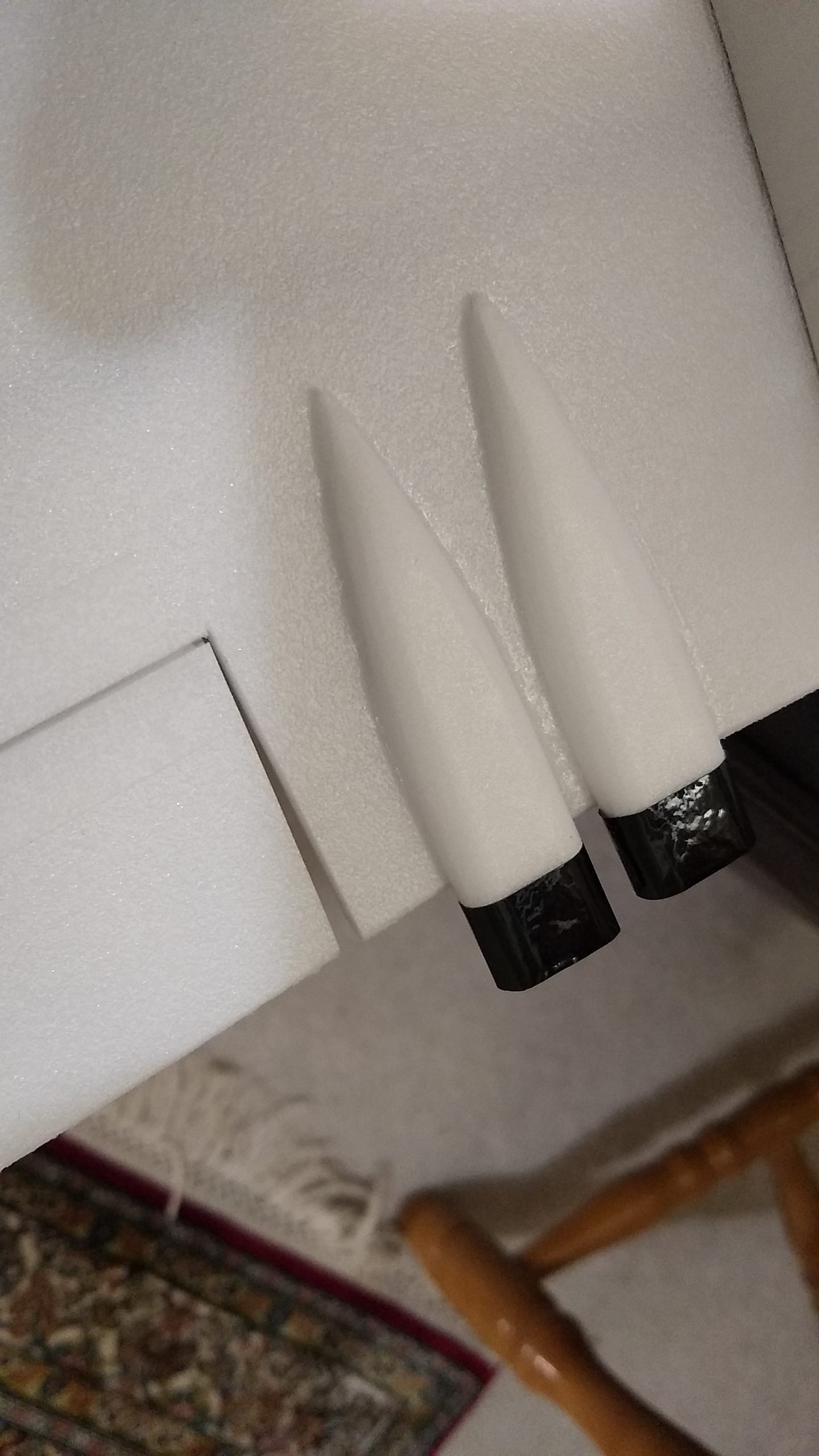 Motor detail on the top of the wing on each side.

Install the pushrod/horns in the pre-punched holes in the bottom of each surface, note the pushrod is closest to the body tube on each side so it angles inward slightly. 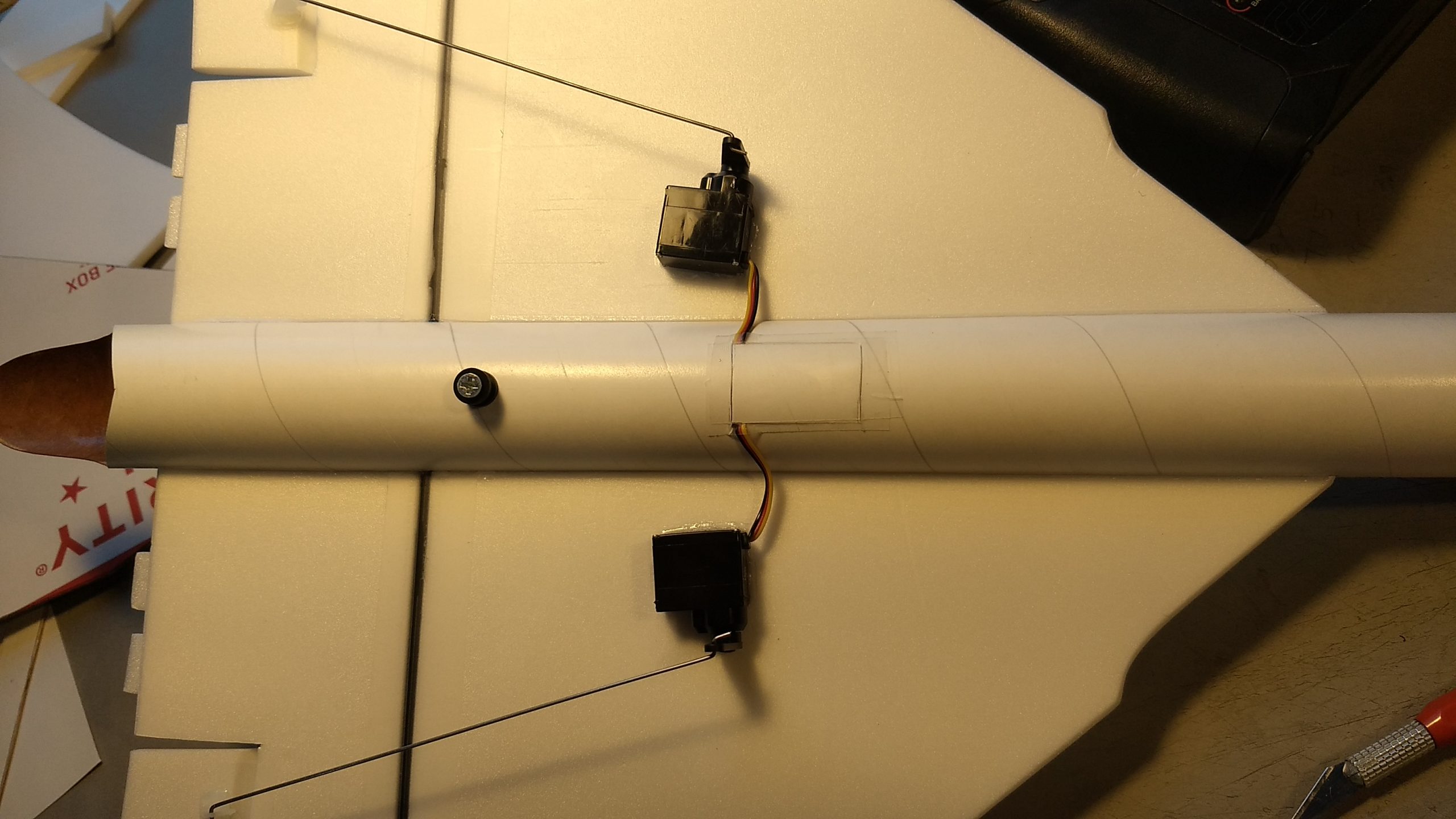 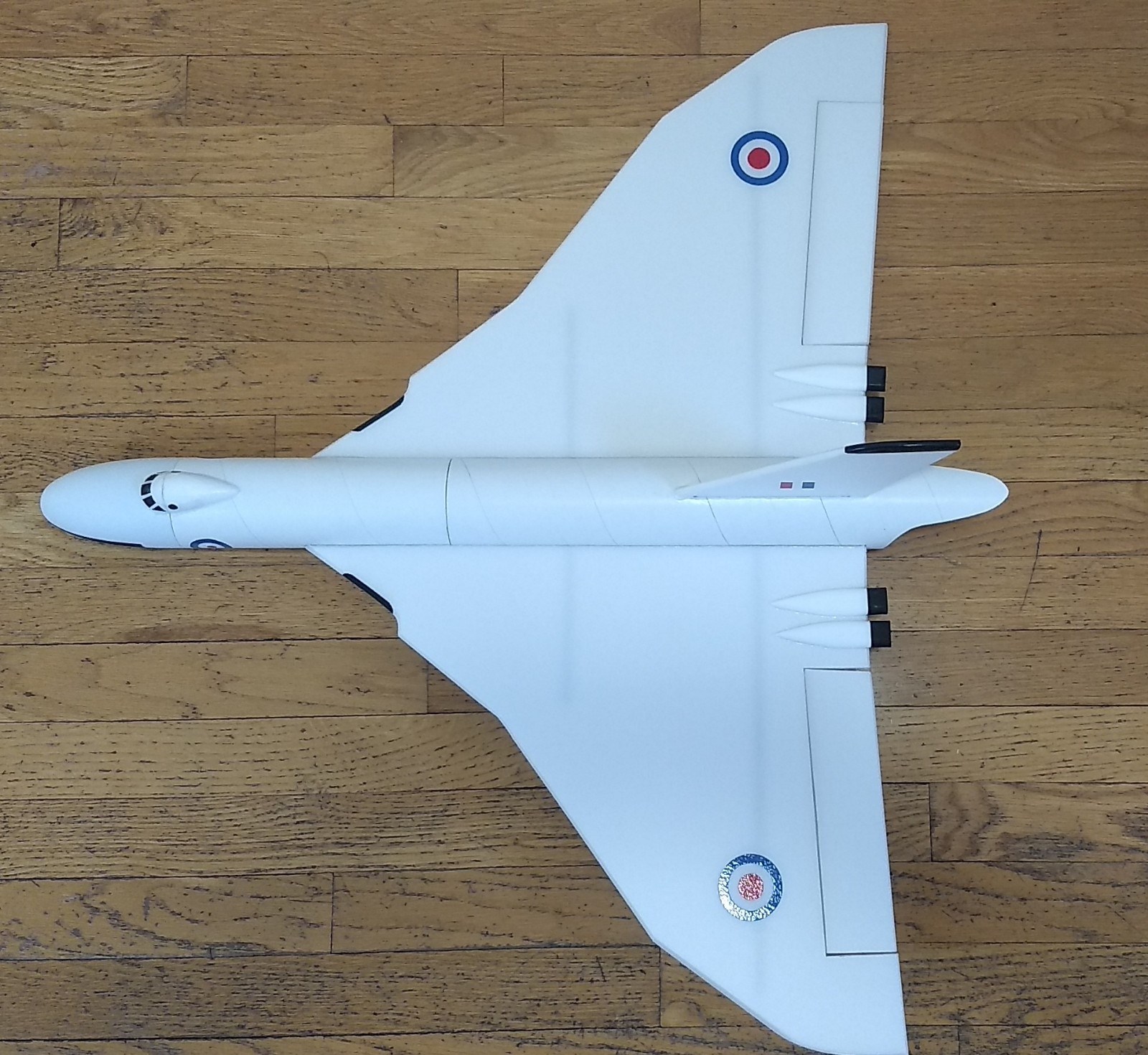 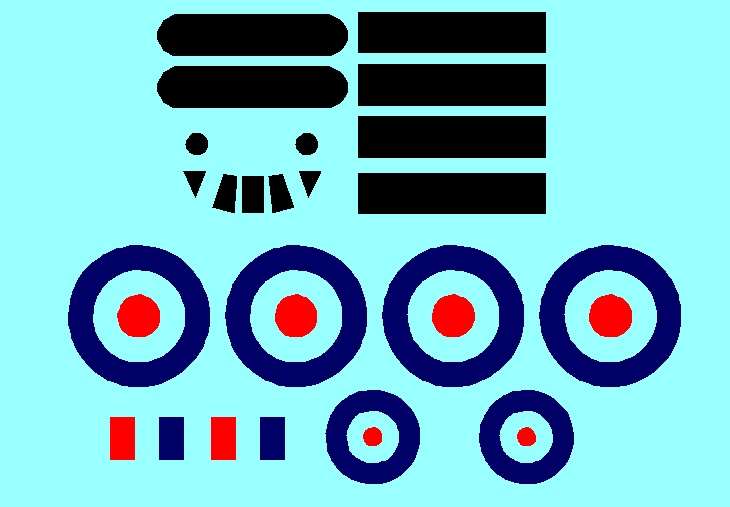