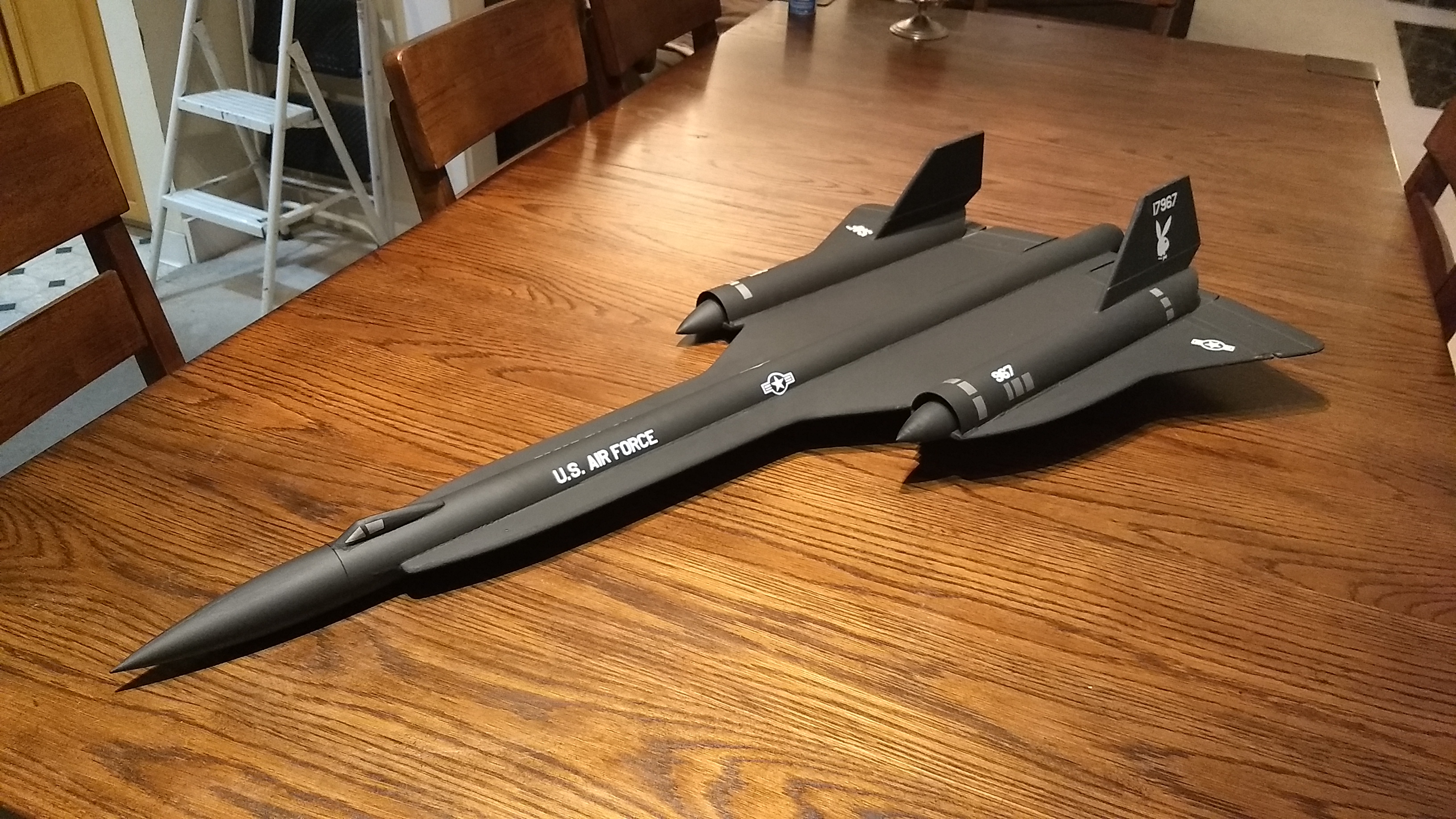 The YF-12 RC Rocket glider kit is designed after the prototype interceptor version of the A-12/SR-71.  It comes with  white BMS tubing for the body and engine nacelles and Depron wing and tail surfaces.   You will need two 8-11 gram type servos, a receiver, and a small 500mah single cell lipo battery and an 18″-20″ servo extension.  You will need a transmitter with delta or elevon mixing.   Foam safe CA+ is the only correct glue to use for all construction on this model.  Any other adhesive will add weight in the wrong place, and reduce flight performance.  Please refer to the General instructions for all kits tab above, then read these instructions completely before starting assembly.  For E-6 motors(first flight) or E-20 motors(once the model is trimmed) Wingspan  21.5″, length 40″(about 1/32 scale) weight 12 oz rtf.  High quality cut vinyl decals available Here

This kit is more of a builders kit than my others, but still not complicated if you follow the directions.

CG location for rocket flight:  1″ behind the the front of the nacelle tubes.

The kits are packed to protect them in shipping, but the contents are fragile so unpack carefully.  Carefully cut the tape holding the tubes in the box, then unwrap/lightly cut the plastic wrap to free the tubes, the spar may be packed in the tubes and the baggie with the little parts and nose cone will be in the tubes as well.  Carefully cut the tape holding the cardboard wing protector in the box and carefully remove it, don’t pull hard or bend it.  Then carefully cut the tape holding the cardboard top piece to the bottom.  There may be some sticky tape holding the cardboard to the bottom cardboard piece, carefully peel it being sure not to bend anything.  Once the top cardboard is free you can see the foam wing/tail parts, there are little fragile pieces in here, so unwrap carefully.  It may be best to use an exacto to lightly cut the plastic wrap and carefully remove it without cutting into the foam.  Make sure everything is free before you remove the pieces to avoid breaking anything.  Kits contain one or two scrap pieces for repairs if you damage anything in construction or flight, just cut and patch in a spare piece of the foam if needed using foam safe CA+.  The tubes may look a bit smudged or have some gray marks, this is due to the aluminum angle I use for cutting the slots, if it bothers you you can use a soft eraser to remove it, but since it will be painted black, it won’t really matter.

Welcome to the world of rocket boosted radio control gliders.  This is not a model for a novice RC pilot, but anyone who is comfortable with RC flying of an aileron controlled medium speed model should be fine.  Read through the instructions, look at the photos and be sure you understand the step before commiting to cutting or glue.

Identify all pieces, the kit should contain:

1 nacelle tube(will be split and used for the right and left nacelles.

Spare foam (for testing paint, glue,  and sanding the edges to see how it behaves)

Flying:  Be ready on the first few flights to keep the model straight till you have the trims set perfectly for boost and glide.  Try to do initial flights in dead calm conditions.  You need to be ready to react quickly to keep it boosting straight up or slightly away from you.    Keep the wings level.  Count to 7 and start to push the model over level as the motor burns out and it slows down.  Then click in the up trim.   Avoid drastic bank angles which cause you to lose altitude and make it easy to lose orientation.  Gently fly around, and set up for landing into the wind when about 100′ high.  The model will rock the wings if you start to get too slow, if this happens push forward on the stick slightly.  The decent rate is very predictable,  keep some speed up so you don’t stall, and keep the wings level as it decends and gently flare just before touchdown.  Try not to flare early and stall the model.

Photos may show the SR-71/HABU kit parts a some assembly steps are identical. 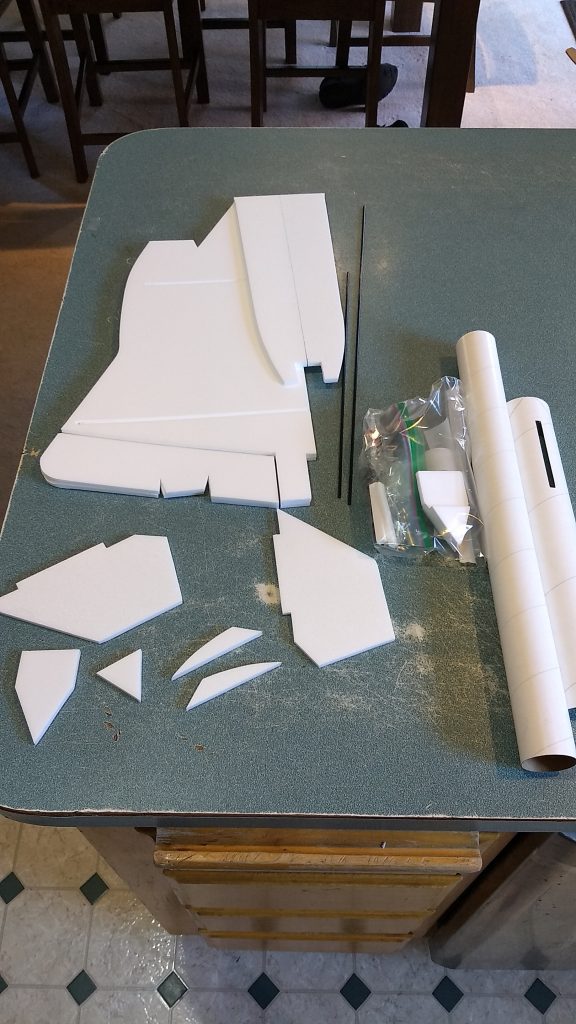 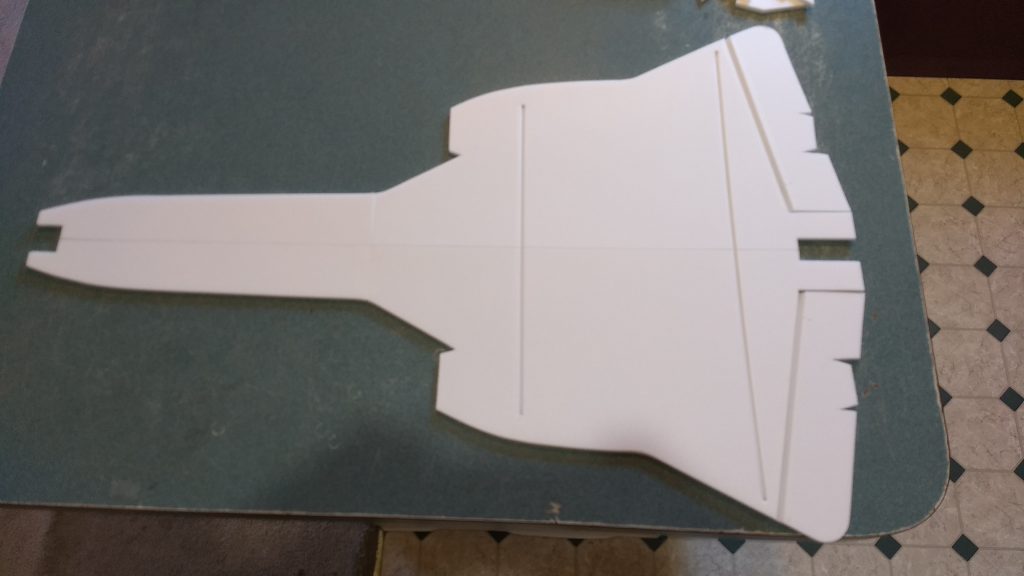 Unfold the wing and glue the taped forward and middle joints 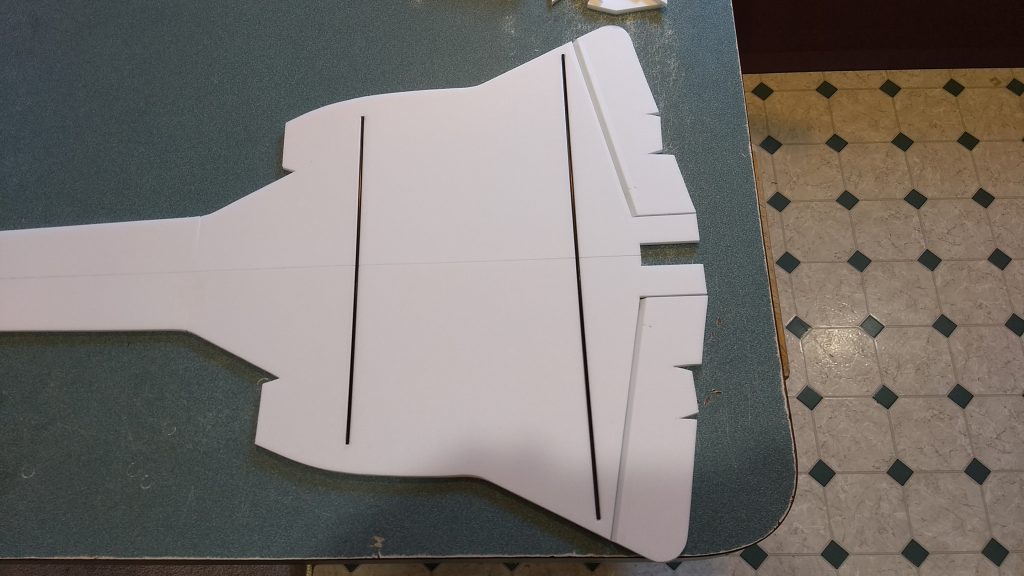 Glue in the two spars then tape over with blenderm tape, sand the edges of the wing round, then tape around the forward joint fully to reinforce it. 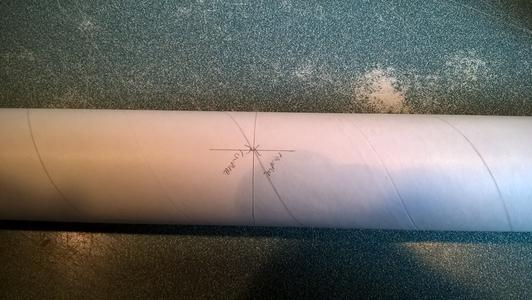 Install the two rail buttons then join the two body tubes so that the alignment arrows are aligned. 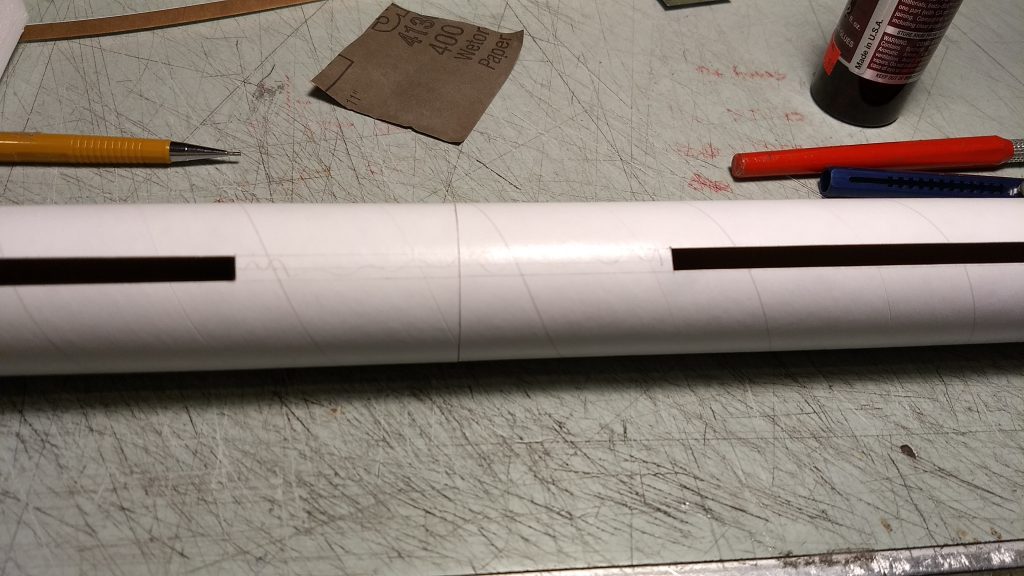 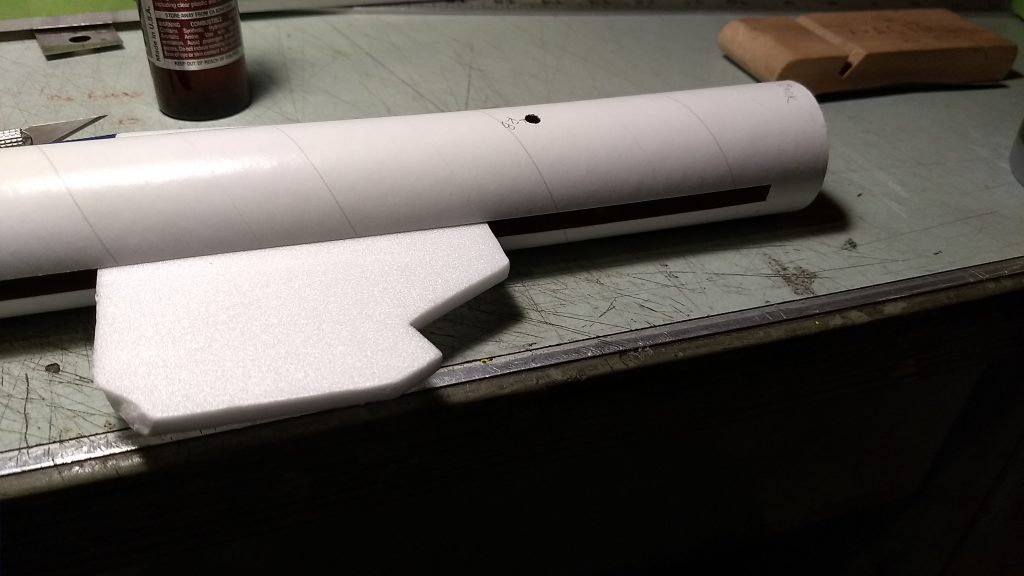 Test slot for fit using scrap foam, then insert wing so that rail buttons are up and wing spars are up as well(model is upside down) make sure the wing is centered then glue in place. 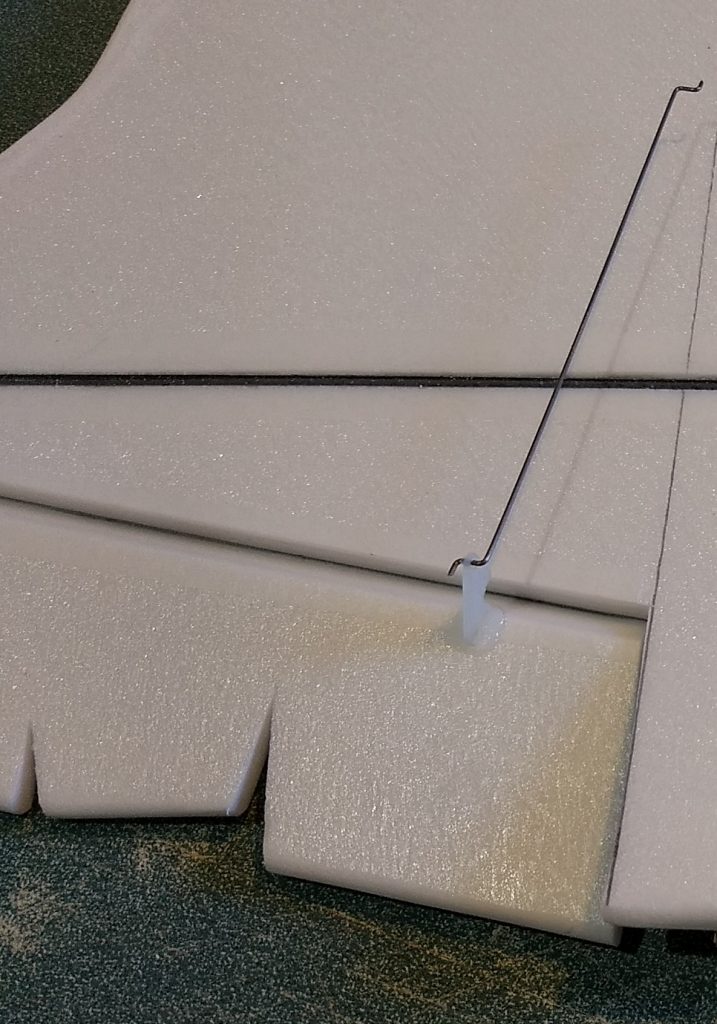 Glue the control horns on the bottom of each surface, note the pushrod is closest to the center of the model. 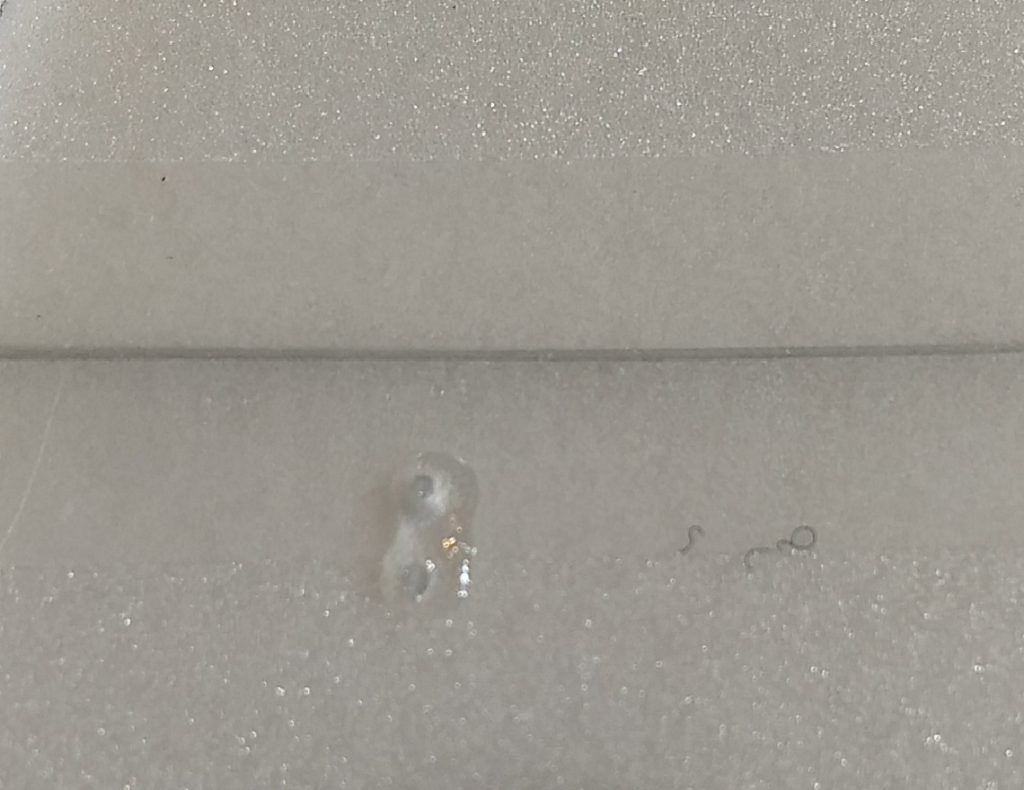 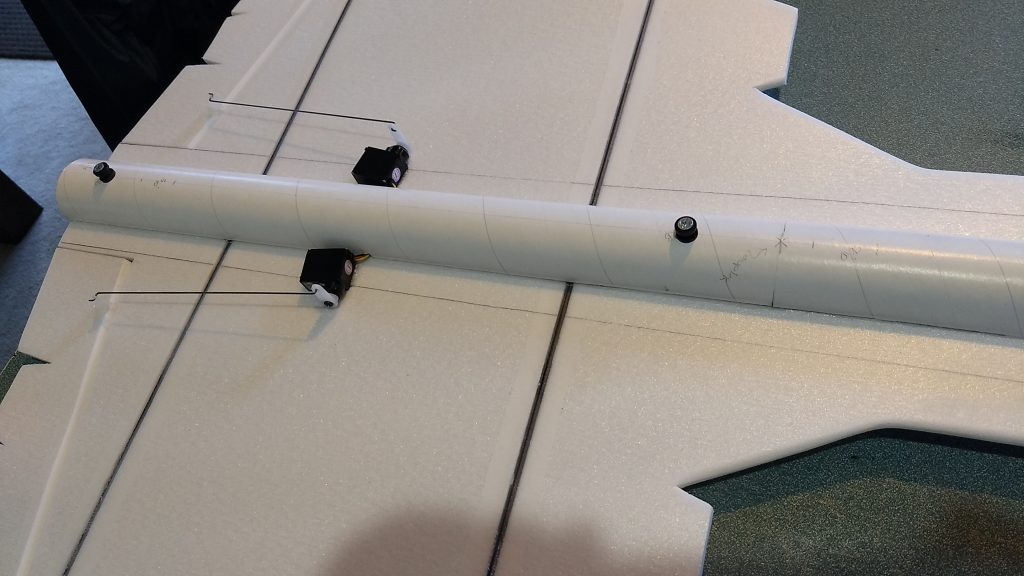 Glue the servos next to the body tube. 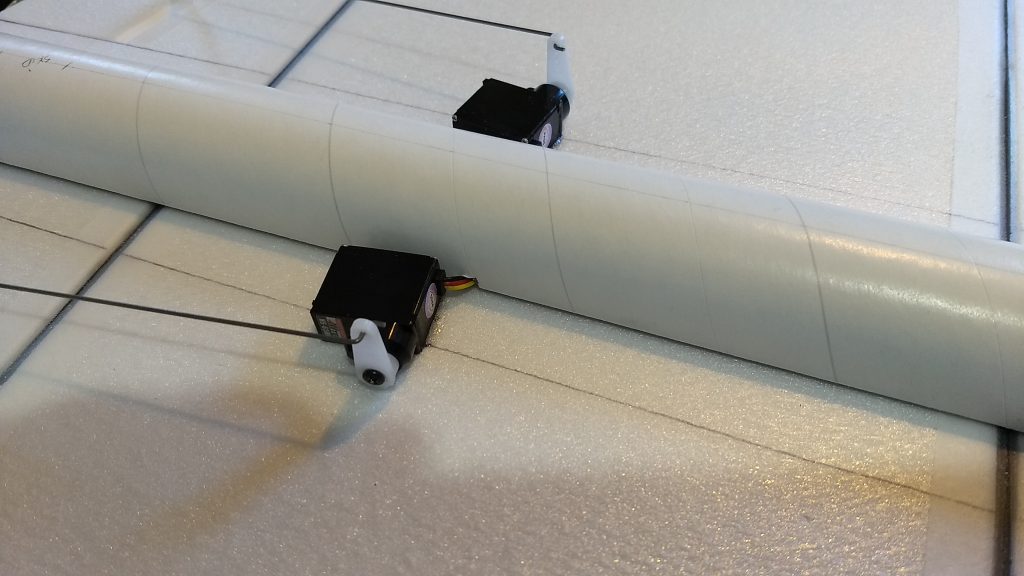 Cut slots for the servo extensions and route them into the body tube and forward out the front. 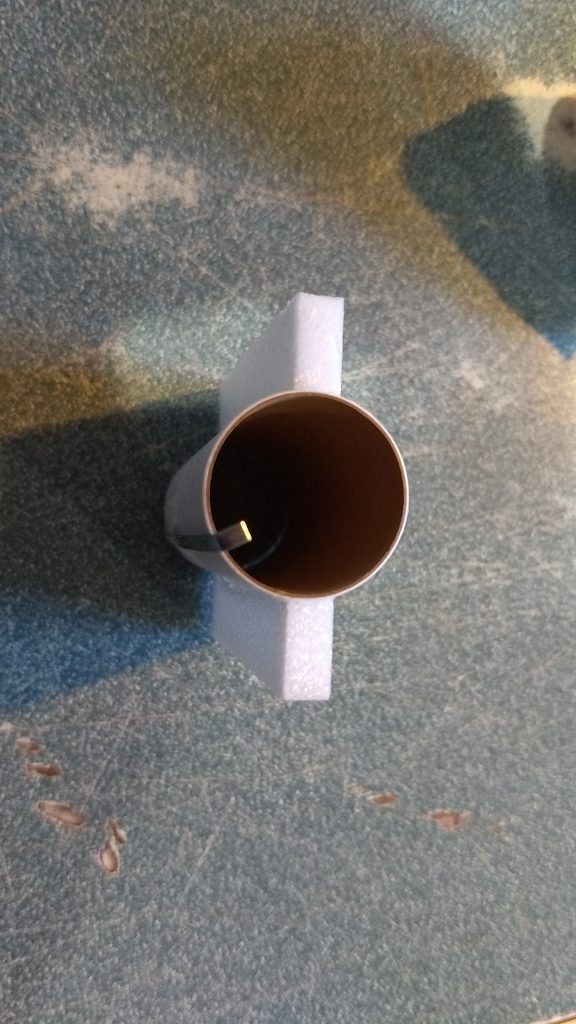 Glue the two foam strips onto the motor tube, note the motor hook is at a 45 degree angle to the foam strips. 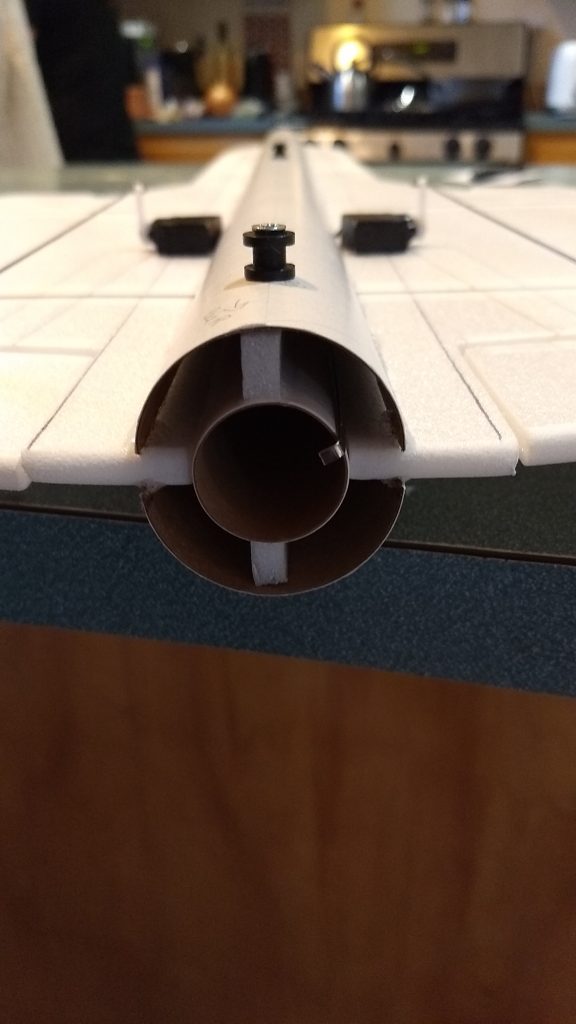 Fit the foam tabs and then insert the motor tube from the rear into the slot in the wing, note how the motor hook clears the foam, glue in place when correct. 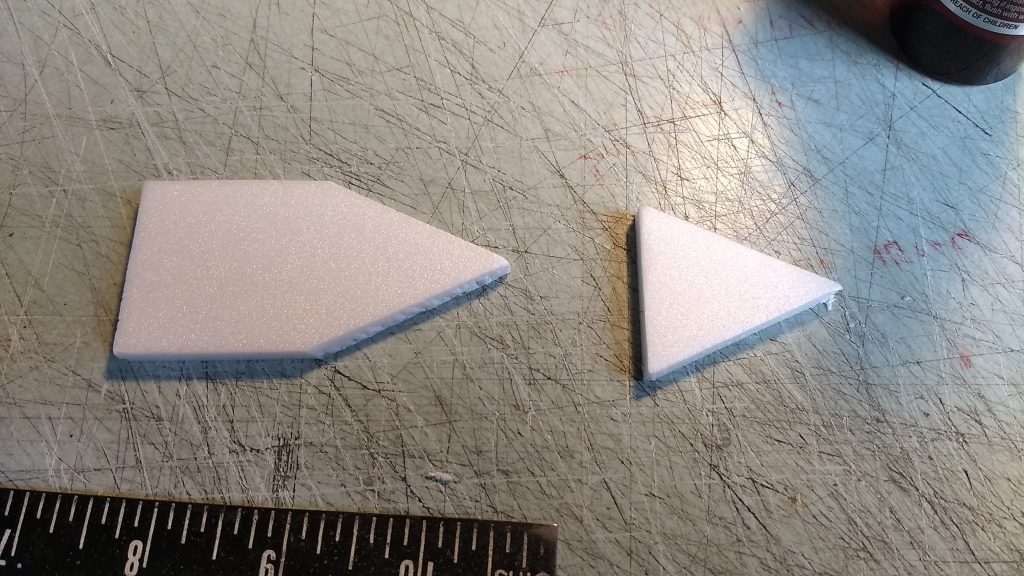 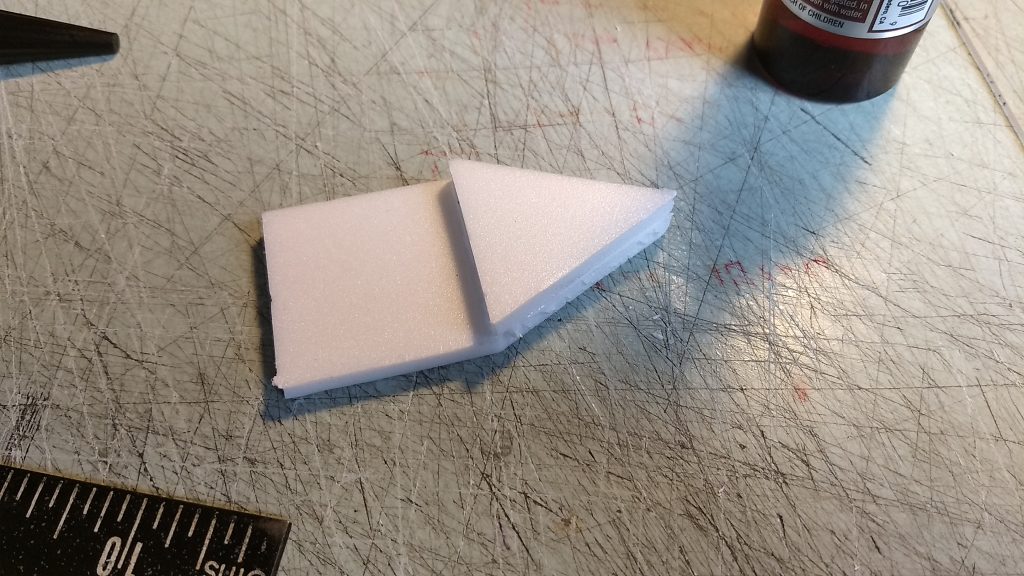 Glue the two intake pieces together. 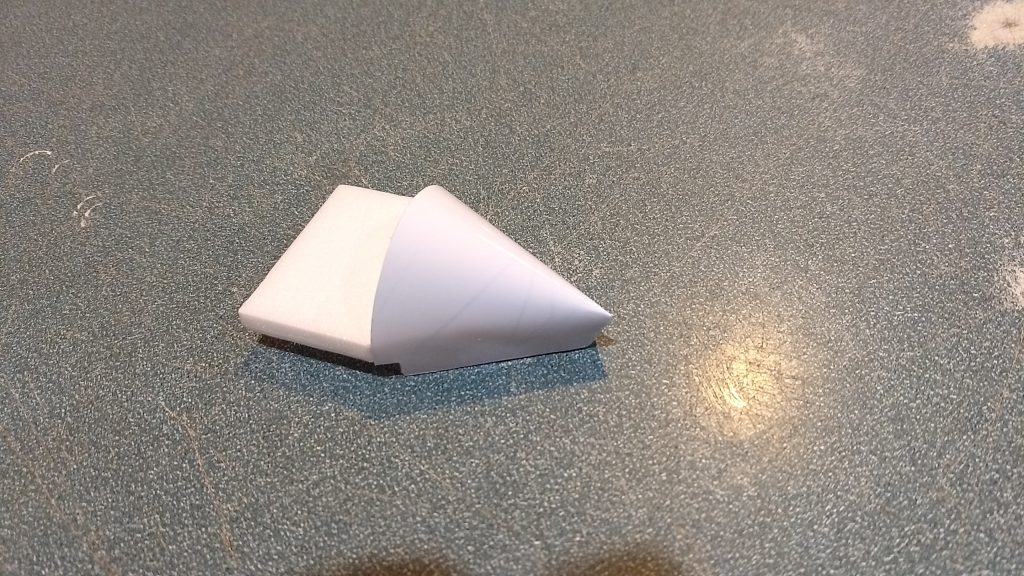 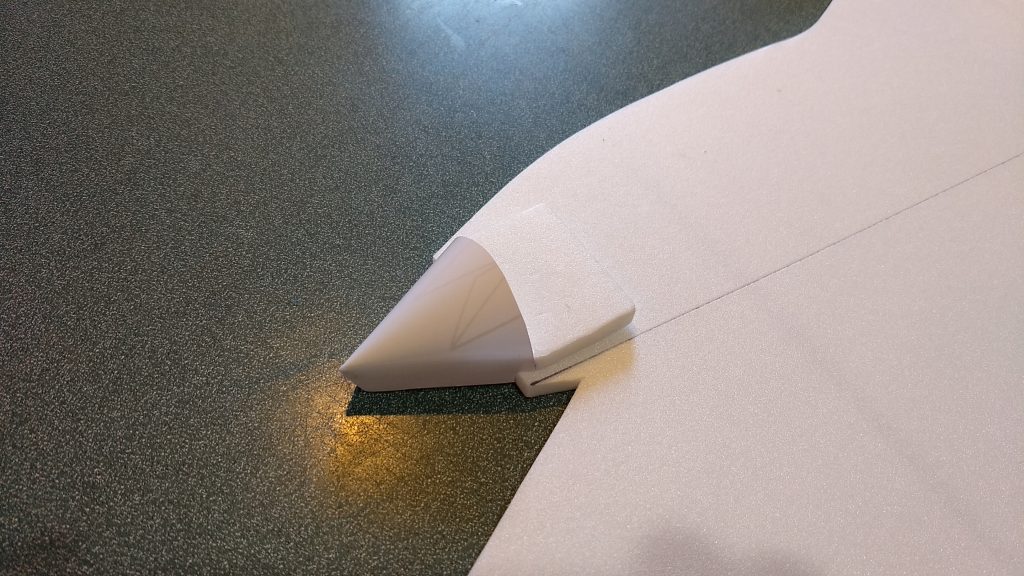 Glue in the intake cone about 1/8″ from the inboard nacelle line marked on the wing and so the step is butted against the wing. 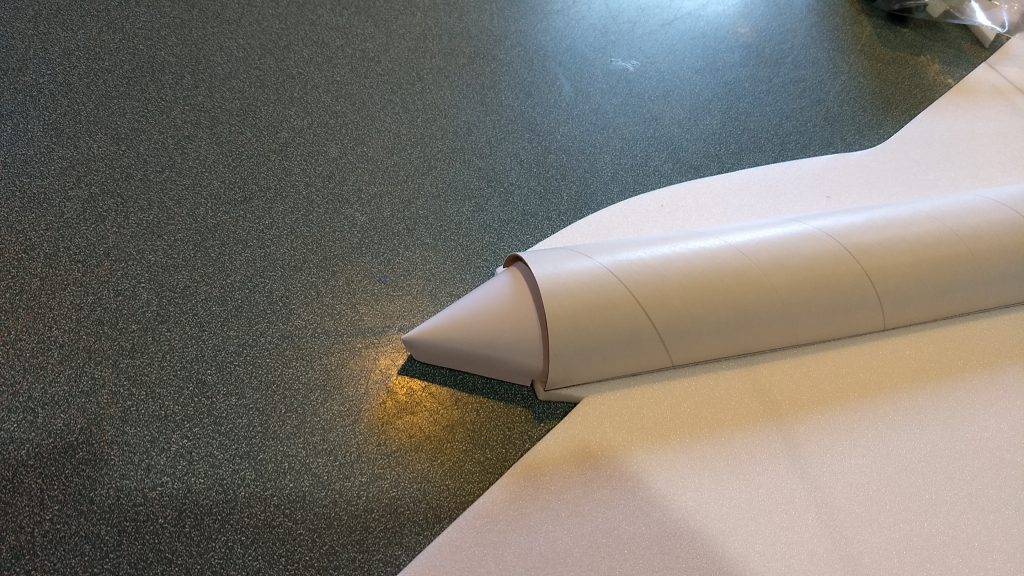 Glue the nacelle tube so it is even with the drawn alignment line and flush with the front of the wing, then glue the other side of the tube. Repeat for other half of the wing. 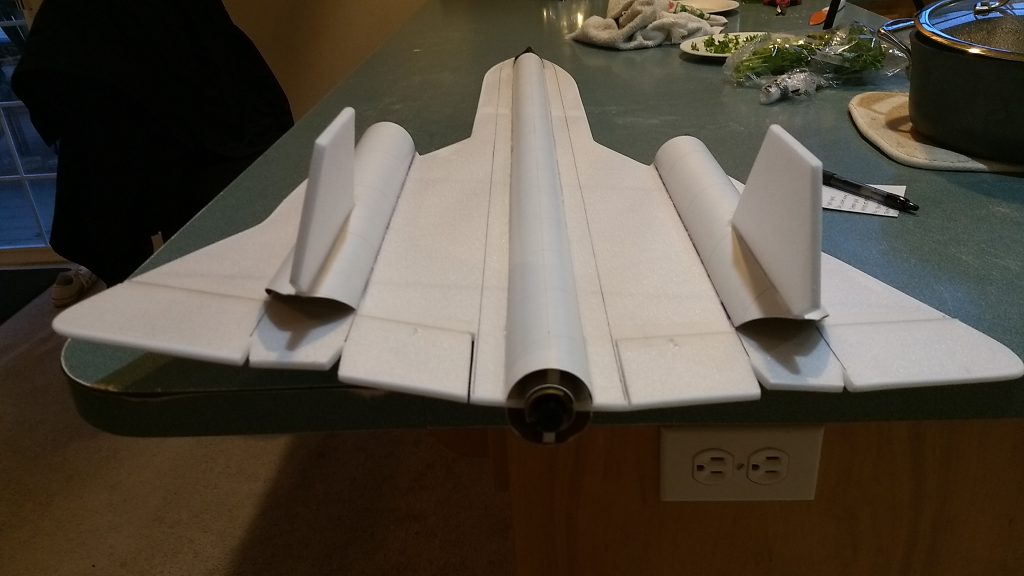 Install the two vertical stabs, note how they angle in, the actual angle isn’t critical but should be approx the same on both sides. 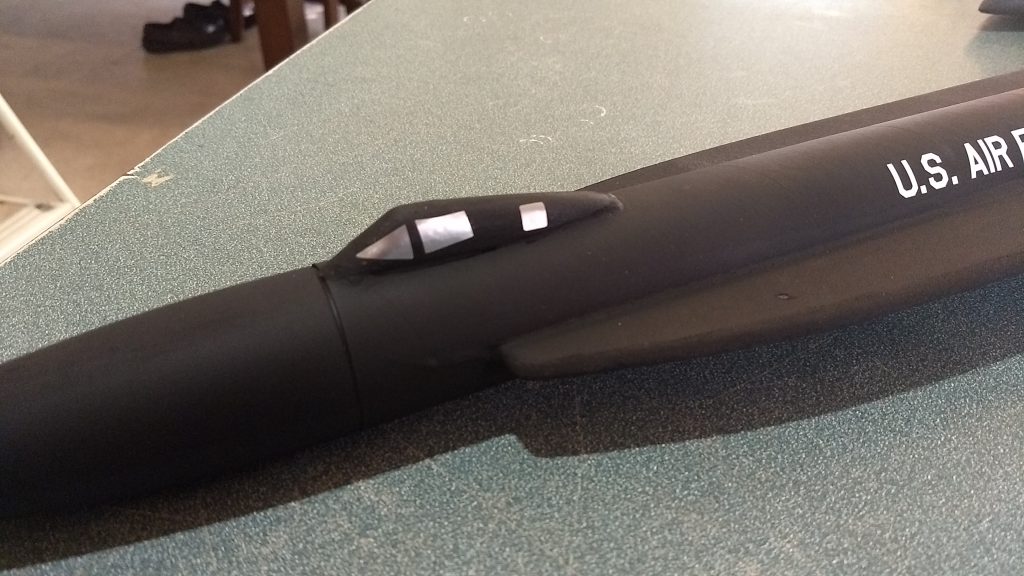 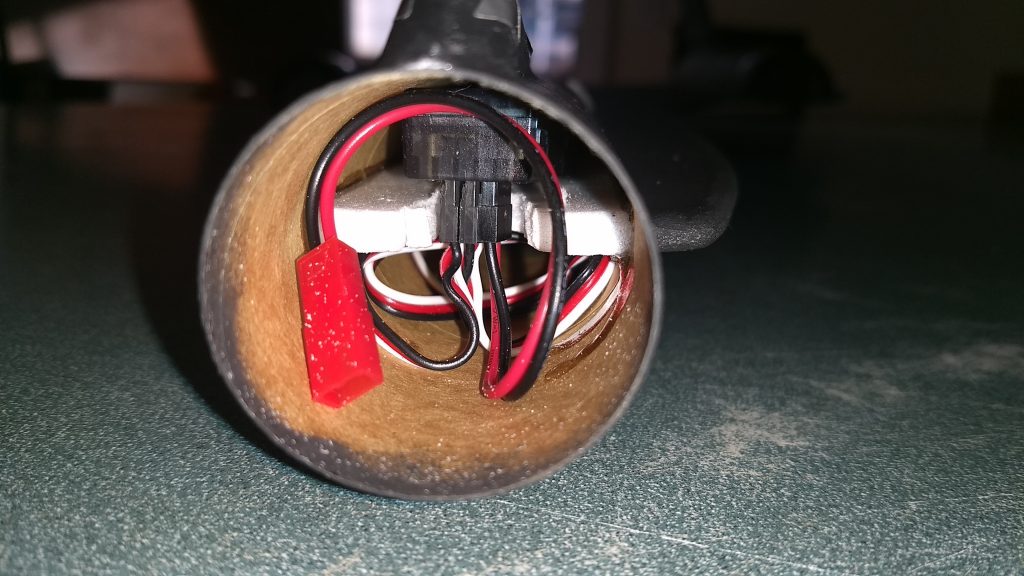 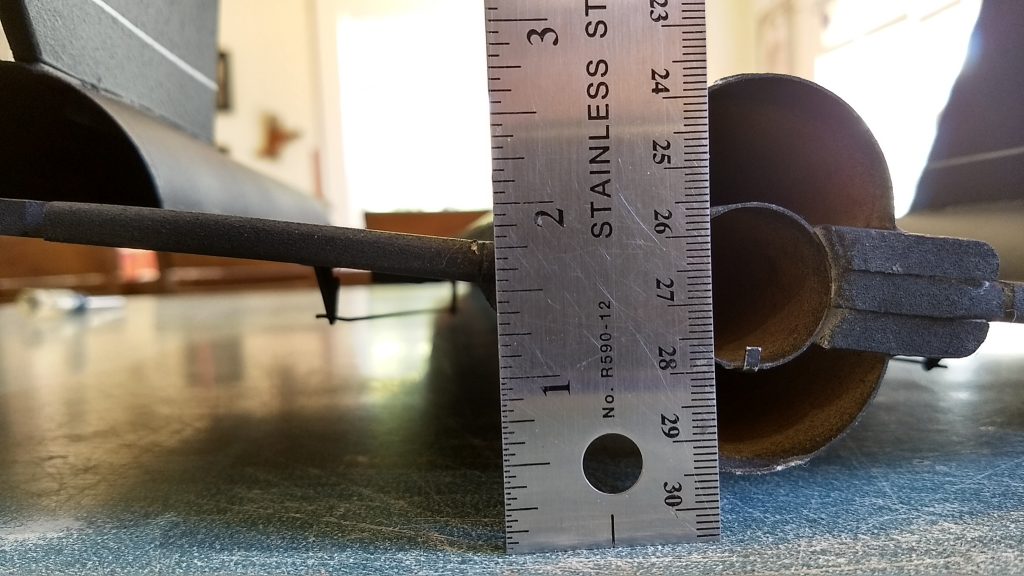 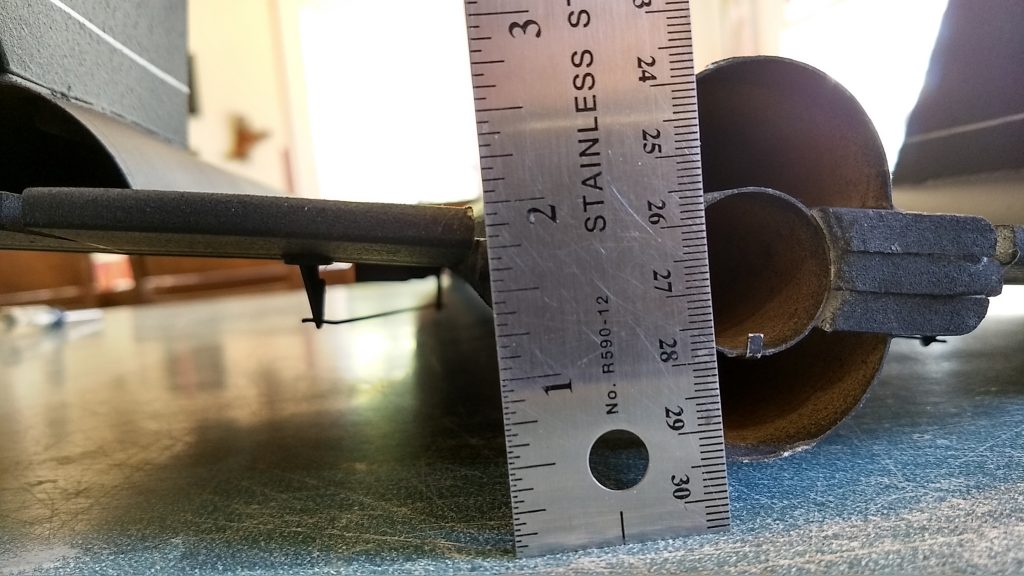 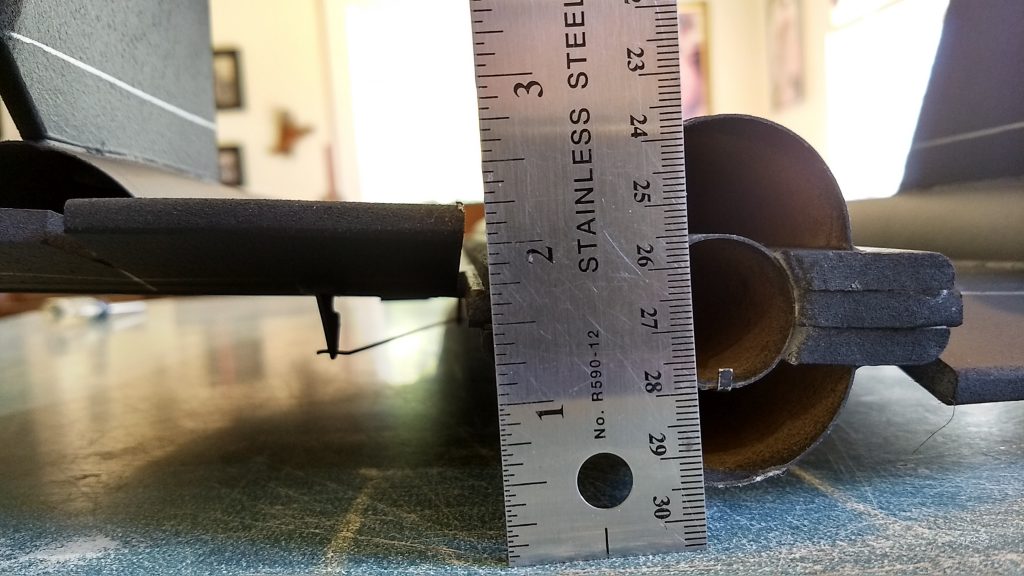 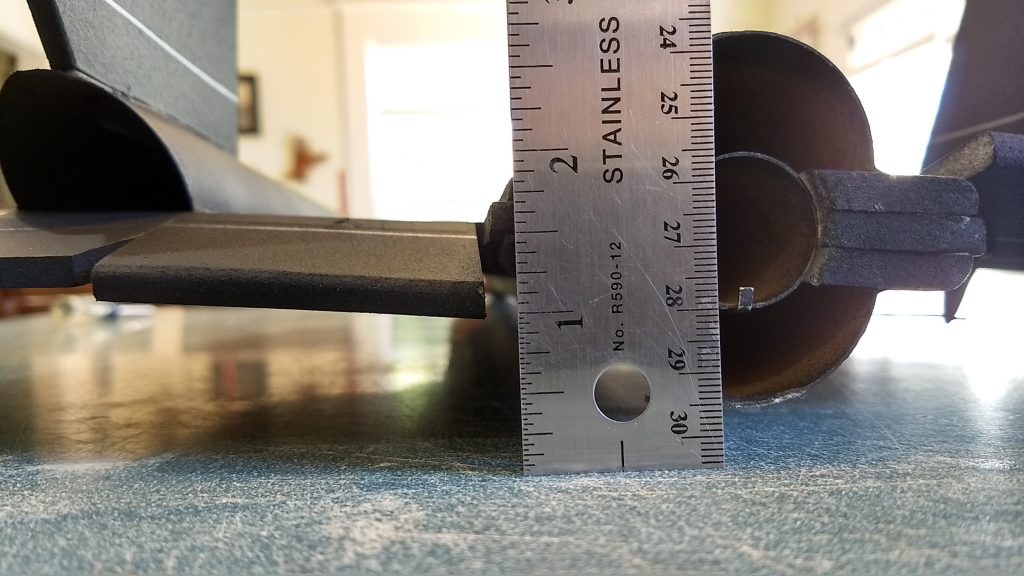 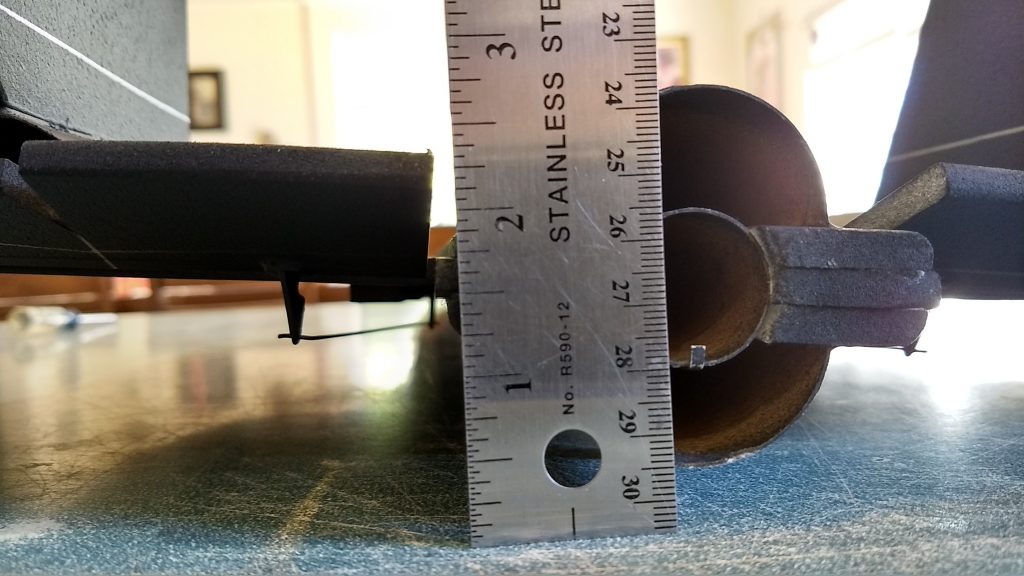 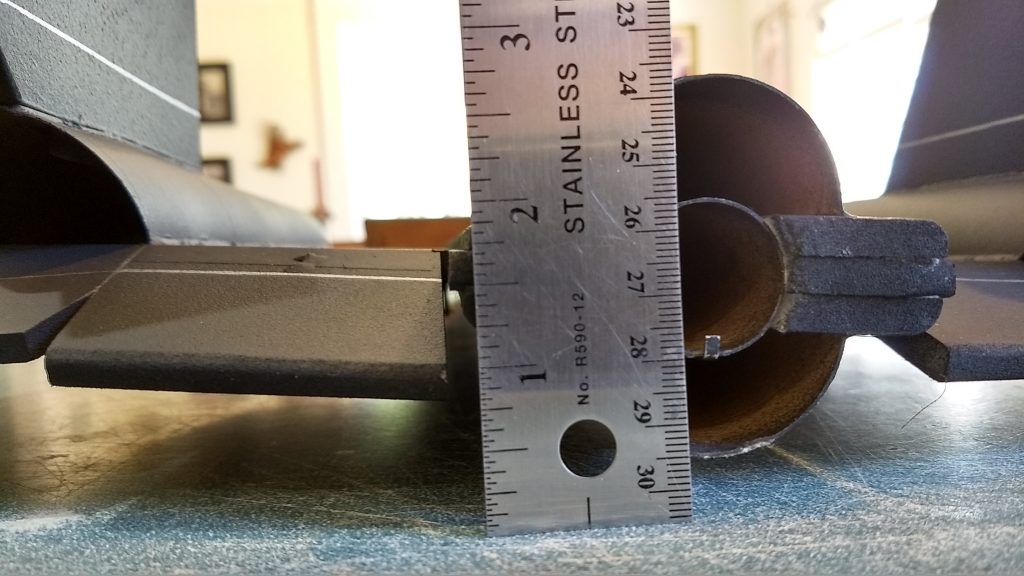 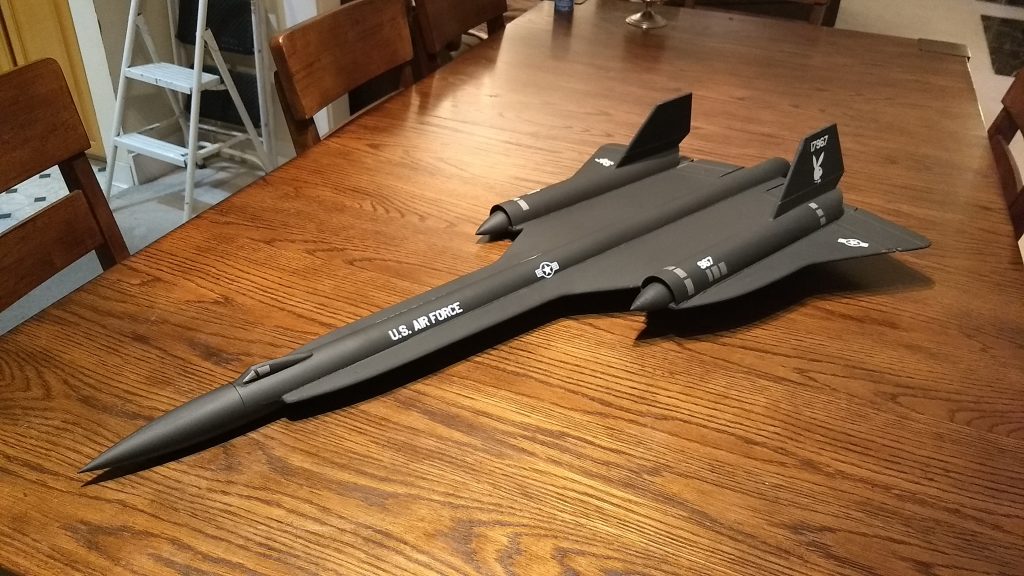 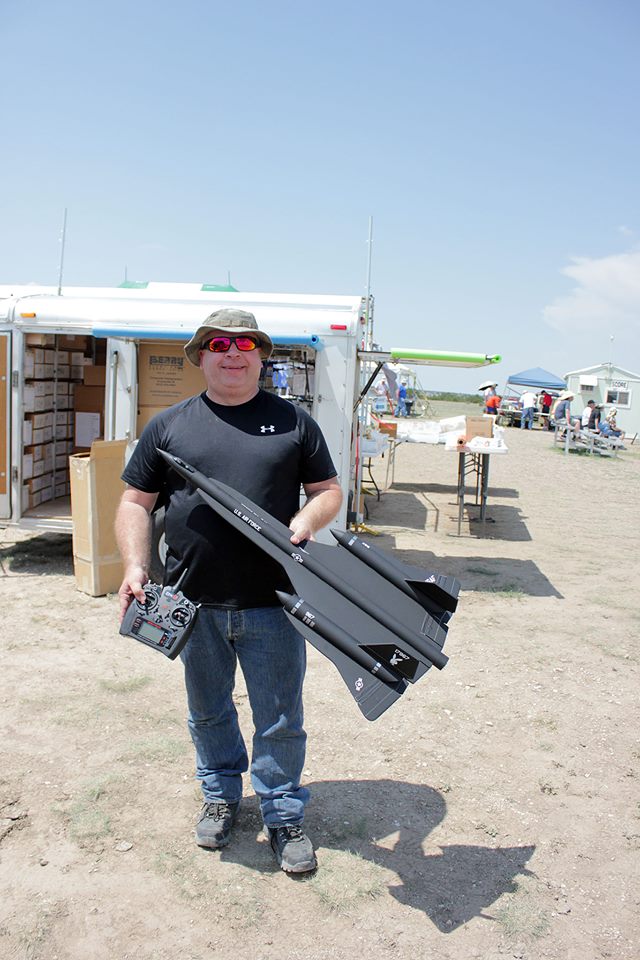 Idea of the size of the model